I recently had the opportunity to photograph the Nashville Corvette Club’s autocross event at Twin Fountains Raceway in Shelbyville, Tennessee. Turn out was great with everything from daily drivers to cars that are dedicated racing machines taking to the track. The event drew participants from all over the mid-west and the action was non-stop for two days.

I’m a little embarrassed to admit it but… The first time I heard of Autocross was just a few years ago when the Good Guys show rolled into Nashville, Tennessee and challenged my doubting mind. Frankly, it seemed a little out of place to have a racetrack set up in the parking lot of the car show. And seriously, how fun could it be to watch fast cars constrained on a small course of plastic pylons? Well, as it turns out, I found out that autocross is seriously fun and the perfect venue to test man and machine. George Kimble of the Nashville Corvette Club perhaps put it best when he described autocross as not so much racing but more “precision driving.” That’s exactly what it is. It’s driver’s learning their cars and pushing them to the edge to get the very best performance possible.

Autocross emphasizes safe competition and differs from road racing in that there is only one car on the track at a time racing the clock rather than other cars. Because of this format, drivers of all skill levels can participate. Men and women, young and older participated on this weekend with everybody having the same goal of making their next run faster than their last one. Most were successful in doing so but two things were for sure. First, everybody had a great time and secondly, each participant walked away knowing their cars a little better while having improved their personal driving skills. Win, win! 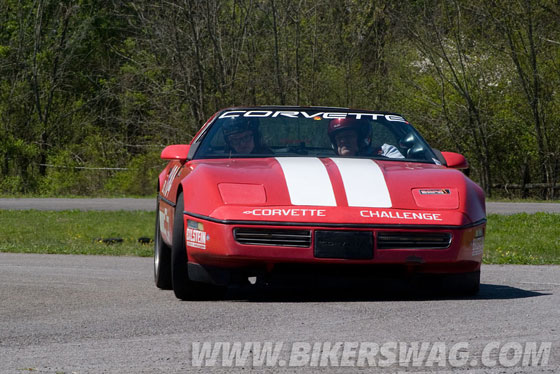 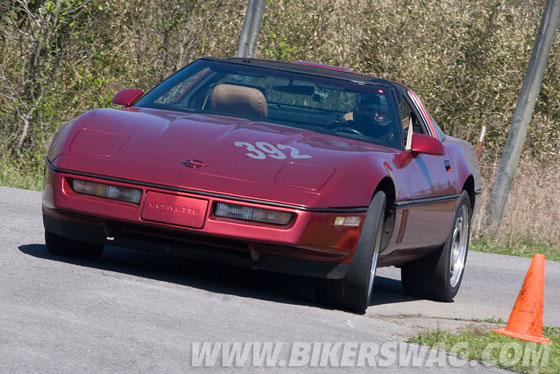 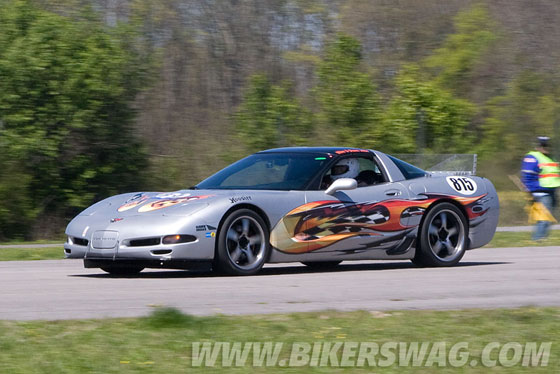 Call them Baby Harley’s, Girls Bikes… whatever you want… I don’t care. I am an unashamed fan of the Motor Company’s low-end two-wheeler and am convinced that the Sportster is the perfect bike for mods. As a result, I am always on the lookout for new and interesting work by those who feel the same as I do. I spotted this particular example at the 2011 “Spring Thaw” bike show in Shelbyville, Tennessee. The minimalist approach is smokin’ hot and I love that bobbed rear fender. Not sure if I have the CO JONES to cut my frame like that but I think the end look is killer! What do you think? 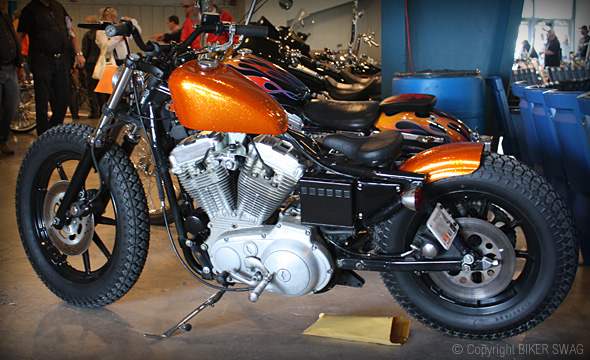 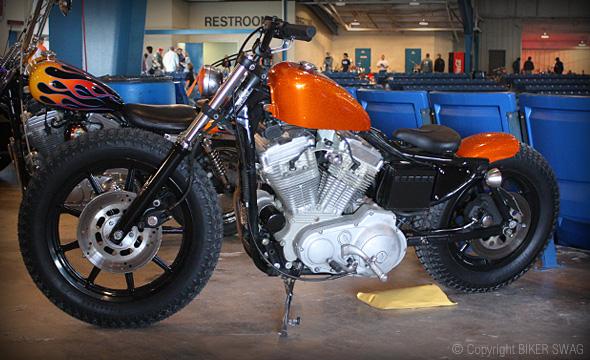 And… speaking of the “Spring Thaw”… 2012 marks the 10th Anniversary of the show. Anybody close to the Nashvegas area on March 24 should come out and celebrate the end of the “Dark Months” with me. My friends Scooter and Dorris over at Both Barrels Promotions do a great job of making this one of the best shows in the region and I wouldn’t miss it. Below is the show poster which I designed. Hope to see you there! 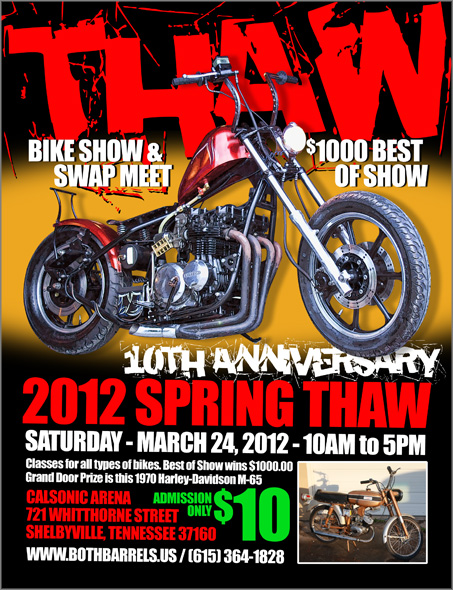 I had a great time at the 2009 Spring Thaw Bike Show and Swap Meet in Shelbyville, Tennessee today. I took the Canon SD1000 point-and-shoot with me and got a few shots and as usual I was drawn to the “old-school” and “low-buck-chopper” bikes. As a matter of fact, I was one of the judges in the “Low-Buck-Chopper” class.

Follow the link at the bottom of this RANT to see a ton more pics. Congrats to Both Barrels Promotions for another great event this year. 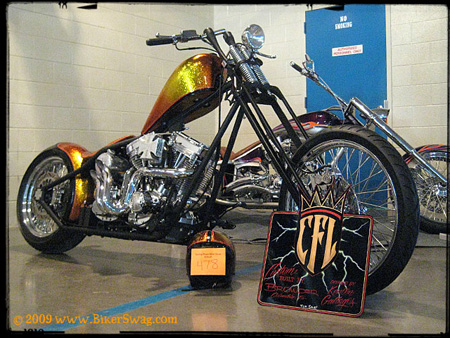 Every year I look forward to the annual “Spring Thaw Bike Show and Swap Meet” held in Shelbyville, Tennessee and the 2009 version (7th annual) is happening this Saturday April 4th. My buddy Scooter over at Both Barrels Promotions has done a fantastic job of building this show over the years and I hear that this year there will be more bikes and vendors than ever before.

You gotta check it out… there are classes for literally every kind of bike (I’ve never been to any show where they give out more trophy’s) plus the best of show will receive $1,000 cash plus a spot on the cover of a future Thunder Roads Tennessee magazine and… my favorite class… the Low-Buck Chopper class winner will take home $500!

If you are close to Middle Tennessee this weekend, I hope you will come check it out… BTW, I am one of the judges this year so be nice to me! Ha!

FAMOUS IN A SMALL TOWN

Last night I headed south out of Nashville to the town that country music star Miranda Lambert shot her video “Famous in a Small Town” in. But Shelbyville, Tennessee is not just the video home to the girl who gave us huge hits like “Kerosene”, “Crazy Ex-Girlfriend” and “Famous in a Small Town”… it is also home to the Calsonic Arena which among other things hosts a Victory Sports Indoor Motocross event each January.

Sorry Miranda but on this night your small town belonged to Motocross racers. And there were all types. I saw races with guys, girls, 4 year olds, 40+ year olds and every age group in between. There were even ATV (4-wheeler) races. It was an awesome event and I can’t say enough what a fantastic job Victory Sports did in presenting a family oriented fun event.

Of course there is more to this than just fun. The riders in the PRO classes, coming from all over the mid-south, are most definitely out to WIN and there were some great finishes in these classes that left no doubt about it. You can check out the series point standings at www.victory-sports.com if you are interested. On this night Robbie Horton grabbed the top of the podium in the 450 Pro Class and Chris Osborne narrowly got the victory in the 250 Pro Class. To borrow from Miranda… those 2 guys were definitely “Famous in a Small Town” last night!

I had intended to get a bunch of pictures but in a bonehead move… I forgot to charge up the batteries to my Canon. I fired two shots (posted here) and that was it! But here’s an idea… instead of looking at my non-existent pictures, go check out a local MX event for yourself. I promise you will have a great time!