My youngest daughter is enjoying Florida this weekend with some friends… and since the rest of my family has little time for me these days (but I’m not bitter…haha!) … I hopped on the bike and took off. I left at about 11:00am and didn’t get back until almost 8:00pm. It was a great day to ride in Middle Tennessee and I hit a ton of roads that I had never been on before.

And, speaking of hit… I also got hit about a million times today by Cicadas! (You people in the north can Google it.) One nailed me right on the cheek so hard I thought I was going to have to pull over. It literally left a bruise. (When are these psycho things supposed to dig themselves back into the ground?)

But seriously… there is something about the “lone-wolf/wanderer” rides that I totally dig. Getting somewhat lost (physically and mentally) and having to navigate unfamiliar roads is a kick for me and I find it refreshing. The picture at the top of this RANT was taken somewhere north of Nashville at a location where I didn’t know where I was. It didn’t matter… it was awesome… and I did eventually find my way back to civilization. I ended up at one of our Nashville H-D dealers at one point and they happen to be having a bike show. The pics below are from there. It was an awesome day! 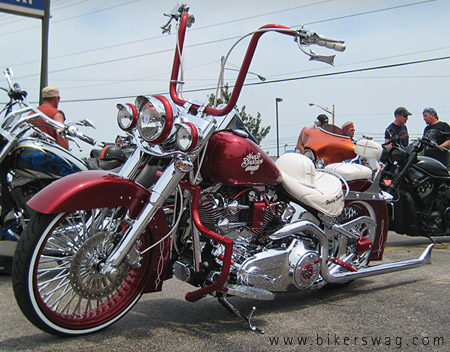 This entry was posted on May 28, 2011 by bikerswag. It was filed under Harley-Davidson, Out and About With Swag and was tagged with Biker, Biker Swag, BikerSwag, Harely-Davidson, Motorcycle, Nashville, Sportster, Tennessee.