AN INTERVIEW WITH BRYAN DUNCAN

When I was a freshman in high school a friend invited me to a concert that was taking place at a nearby Chicagoland church. I wasn’t all that thrilled with the idea but I went anyway… mostly because I knew a certain young lady I had my eye on would be there… but, when I walked through the door I was surprised to see that this was not your typical “Jesus Music” event. Most “Christian” concerts in those days consisted of a solo performer with an acoustic guitar playing folk tunes but this was a full-on band with superb musicianship and a dynamite, powerhouse of a singer. The band was Sweet Comfort Band and the singer was Bryan Duncan. I immediately went out and grabbed their first record “Sweet Comfort”, and over the next few years bought everything they did. I became a huge fan of the well-crafted R&B/Rock music and an even bigger fan of the superb vocalist.

It wasn’t until a few years later that I got a glimpse into the personality behind the voice. In 1982, and now living in Kansas City, I once again made my way to a Sweet Comfort Band concert. Before the show I visited the men’s room and as I was standing at a urinal taking care of business someone took their place at the next stall over and proclaimed, “You know, no matter how great you think you are, everybody is equal right here.” I looked over to see Bryan Duncan laughing at himself and realized that not only was he musically talented but he was funny too.

Soon after the band went separate ways and Bryan’s solo career took off with projects that had titles like “Have Yourself Committed”, “Holy Rollin” and “Anonymous Confessions of a Lunatic Friend”. There have been 12 others since then and together they have sold over 1 million copies.

So why am I telling you all of this on a biker blog? Well, recently I rediscovered Bryan thanks to a chance on-line meeting (yes Twitter does have some value) and I was pleasantly surprised to find out that Bryan, who still cranks out some of the best R&B flavored music you will hear anywhere, has also become an avid rider. And the wacky personality is still in tact… so much so that Bryan now also adds writer (the book kind) to his resume and has recently had a book published that is a must for any biker called “Hogwash: One Biker’s Sarcastic Observations Of Motorcycle Madness”. With chapter titles like “How A Biker Knows He’s Gettin Old”, “How You Know Yer At A Biker Wedding” and “Things You Don’t Get With That HOG Membership Card”… I think you get the idea that the word sarcastic in the sub-title is well earned.

I recently got to talk to Bryan about a variety of subjects including music, addiction, God and of course Motorcycles and Hogwash.

SWAG: Tell me about your musical development. Were you one of those kids who was a natural born singer?

BRYAN: I don’t think so, but I was born screamin!

SWAG: I don’t doubt that! Haha… So nature aside, who were your early influences?

BRYAN: Gospel of course, and then James Brown, Motown, and later Steely Dan.

SWAG: That’s interesting… I wouldn’t have thought of the Godfather of Soul as one of your influences but now that I think about it… I can definitely hear it. So when did you know that music would become your career?

BRYAN: I don’t feel like I ever arrived at that notion…

SWAG: Ha… OK, let me rephrase that… when did music become your full-time gig?

BRYAN: It was when I got too busy to keep a day job. Around “Breakin’ the Ice” I think. (Ed Note: Breakin’ The Ice was the second Sweet Comfort Band album that came out in 1979)

SWAG: But enough about music… for now… this is a biker blog right? How were you introduced to motorcycles?

BRYAN: A guy in rehab had one… and I borrowed it after step four!

SWAG: OK, let me stop here and say… a lot of people might be surprised to hear that you were in rehab. You know… how can a guy in one of the most recognizable Christian bands in the world end up in a recovery program?

BRYAN: Dealin’ with religious people will put you in some kind of recovery.

SWAG: Haha… and I’m sure your honesty about your addictions affected your career in Christian music.

BRYAN: I probably lost half my career as a result.

SWAG: I was in the Christian music industry for a few years and I know that some people have a tendency to want you to be perfect and put you on some unrealistic pedestal… but the reality is that being real goes a lot farther.

BRYAN: They say in rehab I have to be honest with God, myself and one other person… someone I trust… but those I’ve shared with are usually more comfortable with me now than they were when they thought I was perfect.

SWAG: I hear you… Where would you say your relationship with God is these days?

BRYAN: Maybe better than ever… but there’s always some distance that I feel.

SWAG: OK… so back to motorcycles… the ride in rehab started your love affair with two wheels but what was your first bike?

BRYAN: I got a used Yamaha V-Star 1100 because it was a great bike for short people… I learned to ride it when I took a safety course. Matilda… my V-Star.

SWAG: Matilda… that’s a nice name for a V-Star! Is Matilda still your ride of choice?

BRYAN: I have an ‘o3 Heritage Softail now… named Jezebel.

SWAG: How often are you able to get out on Jezebel?

BRYAN: I’m a daily rider, mostly because of the gas prices in California!

SWAG: I understand that! Do you consider yourself more of an “around town” kinda guy then or do you like the long hauls as well?

BRYAN: I do both… I ride to almost half of my gigs… anything within a four state area, and sometimes I rent when I’m farther out mostly because of the time factor in getting to and from gigs… unless the gigs up in the Klondike!

SWAG: For me… riding is pretty therapeutic and I find myself thinking a lot when it’s just me on the bike. From a creative standpoint does riding contribute to your writing in any way?

BRYAN: I never thought about that… but I could of saved myself some therapy bills had I bought the bike in the first place!

SWAG: Well… you know what they say… You never see a motorcycle parked outside a shrinks office!

BRYAN: I have written a couple songs ABOUT two wheels. “Wanna Take My Harley to Heaven” was fun and I wrote a song for an ABC show that eventually got rejected… but it was a cool tune called “Some Wishes Come True”. We’ll do something with that one.

SWAG: Anybody who has seen you perform live… or for that matter noticed the titles of some of your solo albums knows that you have a sarcastic and wacky side. Where does that come from?

BRYAN: My dad was a joker… not sarcastic like I’ve become but I think sarcasm is the acknowledgment that I may not have the whole truth on my side… and then again you probably don’t either. And I always hated cut and paste answers anyway.

SWAG: Which brings me to your new book. What inspired you to write Hogwash?

BRYAN: Just ridin’ all the time… observing the weirdness that comes with any culture. Watchin’ people never stops giving you something to comment on!

SWAG: It must be exciting to kind of kick off a new… or I guess I should say… additional career as a writer.

BRYAN: This book was a good place to start writing books… ‘cause it was a short write and a quick read. And I didn’t have to rhyme every other line!

SWAG: I like the “top-ten” feel to Hogwash… because it is easy to read. It also leaves room for a lot more chapters…  Any plans for Hogwash 2?

BRYAN: Yeah… if Hogwash one sells enough to make it worth the time I guess… I’ve already heard stories from other bikers that would have been fun to include.

SWAG: What’s the easiest way for people get a copy of Hogwash?

SWAG: You also have another book just released that you sent me a pre-release of. It’s also very entertaining and funny. Tell me about that.

BRYAN: The book that just came out is called “Dear God..Really?” Prayers You Won’t Hear In Church. It’s like a sarcastic devotional. The prayers are mostly thoughts you’ve had about other people and of course your own shortcomings. 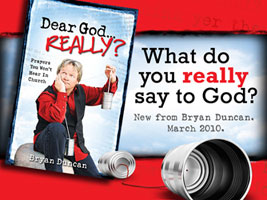 SWAG: So… with all these great books coming out… where does that leave music these days?

BRYAN: Music has been the slow cog in the clockworks lately… no one has figured out how to really harness it again… Downloads are killing sales for all but the biggest bands.

SWAG: Still… I know your band Nehosoul is cranking out some great music and your original band Sweet Comfort Band is back in the studio… which will be really cool for us old-time fans. What can we expect musically from you this year?

SWAG: Ooh… as an old guitarist.. I like the sound of that.

BRYAN: I know… I’m kinda’ back to singin’ too high for my own good!

SWAG: Haha… Im sure you can handle it… you still got it bro! And thanks for taking the time to chat!

© 2010 Biker Swag, All Rights Reserved. No part of this article/interview may be reproduced in any format without express written permission.

This entry was posted on February 26, 2010 by bikerswag. It was filed under Out and About With Swag, Uncategorized and was tagged with Biker, Biker Swag, BikerSwag, Bryan Duncan, Harely-Davidson, Motorcycle, Nehosoul, Sweet Comfort Band.