AN INTERVIEW WITH DAR HOLDSWORTH OF BRASS BALLS BOBBERS & CHOPPERS

Not long ago I came across someone on Twitter that went by the screen name @brassballbobber. After a little investigation, I discovered that this was the Twitter account of a guy in Oklahoma City named Dar Holdsworth who owned a company called Darwin Motorcycles. Further investigation revealed that Darwin Motorcycles were the creators of some of the baddest old-school bobbers and choppers that carry the Brass Balls Bobbers & Choppers badge. Now those of you who have followed my blog for any length of time at all know that I am a HUGE bobber fanatic so of course I had to find out more about this company. Last week I had the opportunity to interview Dar.

SWAG: I hear a lot of stories from bike builders who were brought up around bike shops but you did not get into the motorcycle industry until you were older.

DAR: As a kid, I was always fascinated by cars, motorcycles and all things with motors and wheels. But for me it was a dreamland because my adolescence was spent in an orphanage in Pennsylvania.

SWAG: So there really was no family life for you as a kid?

DAR: When I was 12 my biological father and his wife moved me to Texas and living with him was so awful that I ran away at the age of 16. After being on the streets for a while, a teacher at my high school took me into her house where she and her husband gave me shelter and love.

SWAG: That’s awesome that there are people out there that care enough about a kid to do that for you.

DAR: And to this day, they are the best parents I could have ever asked for.

SWAG: So back to the motorcycle story, how did you finally get introduced to the two-wheeled world?

DAR: After high school I went into the Air Force as Security Police and went to college during non-duty hours. After Desert Storm, I left the Air Force and became a salesman in the Store Signage and Fixture industry. I also got married and worked hard to start my own business in the same industry. I had immediate success, coupled with immediate disaster as I found myself thrust into a nasty divorce. During my separation, I bought a motorcycle and road it like it was the first time I had sex. I could not get enough.

SWAG: So that’s when the bike-building bug bit you?

DAR: Yes, I would stare at it and picture myself building one.

SWAG: How did you go from daydreamer to builder?

DAR: I befriended Sam Wills, owner of Racing Innovations, here in Oklahoma City and I asked him to teach me all there was to know about building and the mechanics of motorcycles. After months of persuasive conversations, he agreed and a few bikes into it, I built a bike for my dad (who adopted me from the streets) and that bike was featured in a national magazine. The phone has not stopped ringing since.

SWAG: That is awesome… How did it feel to begin to be recognized for your designing and building skills?

DAR: I have always had a very creative side. So much so that people close to me thought I was crazy with my ideas until I brought them to life… but since I started late in life, I don’t considered myself any “master this or that” bike builder. I think I still have so much to learn and I push myself each day to learn more. I really love it. I have just been fortunate that I have a good eye for design and that people respond to it.

SWAG: I think maybe you are a little modest! Here we are now… Darwin Motorcycles is a reality and Brass Balls Bobbers & Choppers are fast becoming a buzz in the industry.

DAR: I am smart enough to surround myself with very talented people and collectively, we produce bikes that people like.

SWAG: You mentioned that you are a Desert Storm Veteran and I know you have been very supportive of American soldiers, even offering them discounts at times. What did you learn from your military experience and how does it translate into running a business?

DAR: Discipline and sacrifice. Running a business is not easy… especially this product in this economic climate. The discipline to work at it 16 hours a day and balance that with being a great dad and husband requires sacrifice.

SWAG: And speaking of the economic climate… a lot of motorcycle businesses are being forced to re-think the way they do business to compensate for the downturn. How has that affected your business?

DAR:  We do not have much margin built into the price of our bikes but I believe that if I remain diligent and true to bringing the best hand-built, high quality bikes to market at a fair price, I can build a business that my young children will have the option to participate in one day if they wish.

SWAG: A lot of people may not realize that you are a Federally Licensed Manufacturer, listed with both NADA and Kelley Blue Book. How has that helped your business?

DAR: I felt that it was important to become licensed so that more people would have the ability to get one of our bikes. I saw the writing on the wall in 2005 and thought to myself that there would be less people able to stroke a check for $40k in the future… and more people who’s only hope of getting one would be to finance it.

SWAG: You’ve had bikes featured in major publications and won numerous awards. Are you starting to reach the goals you had for the company?

DAR: Good question… The only goals I have had to this point were to build quality bikes with a timeless design… and to support my family doing so. The awards have blown me away.

SWAG: It must be cool to gain the respect of your peers.

DAR: Respect from my peers and industry-publications is hugely humbling. I just build what I like… what I see in my head. I am not naive enough to think we will get awards each year but I am quite thankful for the attention we have received so far.

DAR: I am dealing with this right now in fact. The business side is what it is… business.

SWAG: And the creative side is a lot more fun!

DAR: The creative side comes when I am helping a customer design their bike or when designing a new model. For example, I was only planning to introduce one new model for 2010, the 69 Chopper (which placed 3 at the World Championships in the production class). But designing a new bike for me is a huge adrenalin rush that lasts for days, even weeks. The good is obvious. The bad is I cannot sleep because I cannot turn my mind off. The result of this is that we are introducing 3 new models for 2010, The 69 Chopper, The Brawler, an FXR inspired sport cruiser, and #3, a bike that will be unveiled in the next couple of months. 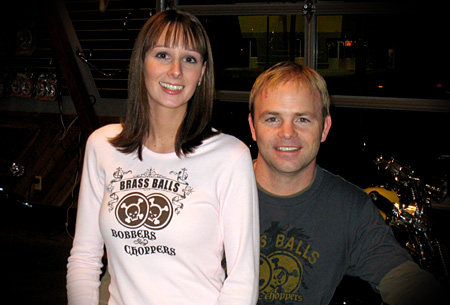 SWAG: It’s obvious from talking to you that balancing family with business is important to you. Tell me about your family life.

DAR: My wife Latrisha is gorgeous, supportive and works with me in the business. My children… Will 9, Jack 7 and Olivia 4… are the light of my life. They are at the office quite a lot and have their own office where they can play and be creative. My wife and kids keep me grounded and happy. I “show up” each day for them.

DAR: It is a moving target that I only have a very small grasp of. In a positive way, I can say that I have been able to share more with people about what we are doing… and good people like you somehow find out about us.

SWAG: That’s right… I first heard of you on Twitter and then when I saw the Model 1 I was hooked. I love the old-school meets bare-bones approach and the price is also very reasonable. Can you give me the history of that bike?

DAR: In 2008 I was designing a cafe racer built around an S&S X-wedge motor. When the economy fell out, I decided that a $30,000 cafe racer was not right for us at that stage of our existence… in this bad economy… so I got back to basics. Retraced history. I believe you can educate yourself by researching successful peoples’ patterns of success… and learn from how they did things. For example… how Henry Ford developed the Model T. We patterned ourselves after his example and developed the Model 1… a high quality, simple motorcycle with no options, but a great design at a great value that everyone would want.

SWAG: It came out great… I must say! Is the Model 1 your top seller?

DAR: Yes it has become our best seller. It was also named “Top 10 Production Bike of 2009” by Easyriders and V-Twin magazine.

SWAG: If someone were interested in a Brass Balls Bobber, where could they come and check one out at?

DAR: A list of dealers is on our web site. Also, people are welcome to visit us at our World Headquarters in Oklahoma City, OK. We routinely have people in and show them how we build our bikes.

SWAG: Thanks Dar for taking the time to answer a few questions and the best of luck with Brass Balls Bobbers!

© 2010 Biker Swag, All Rights Reserved. No part of this article/interview may be reproduced in any format without express written permission.

This entry was posted on January 31, 2010 by bikerswag. It was filed under Out and About With Swag and was tagged with Biker, Biker Swag, BikerSwag, Brass Balls Bobbers, Darwin Motorcycles, Motorcycle.